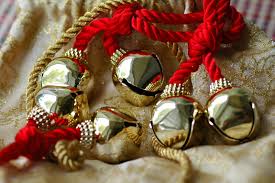 Bells and Christmas go together. It is traditional that the largest bell in the church is rung four times in the hour before midnight and then at midnight all the bells are rung in celebration.

In the Catholic Church, Christmas and Easter are the only times that Mass is allowed to be held at Midnight. It’s traditional that at both midnight Masses, the church and altar bells too in many cases are rung while the Priest says the “Gloria”.

Midnight Mass at Christmas dates back to the early church, when it was believed that Jesus was born at midnight, although there has never been any proof of this! A lot of Churches have midnight services on Christmas Eve, although not every church will have a mass or communion as part of the service; but the bells and Christmas are synonymous.

In many Catholic countries such as France, Spain and Italy, the midnight mass service is very important and everyone tries to go to a service.

In Victorian times, it was very fashionable to go carol singing with small hand bells to play the tune of the carol. Sometimes there would only be the bells and no singing! Hand-bell ringing is still popular today.