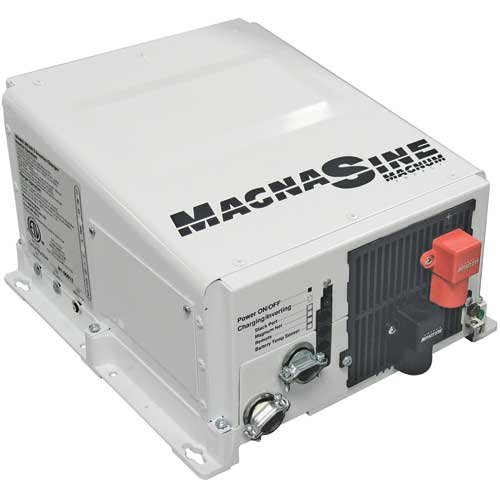 Inverters operate somewhat like battery chargers in reverse: they take DC power from a battery and, utilizing sophisticated circuitry, change it into 120 Volt AC current. The ship’s batteries are the inverter’s fuel tank and, by nature, inverters can consume a lot. They will only provide 120 Volt AC power as long as there is ample juice left in the 12 Volt batteries. It is strongly recommended that you have a separate, dedicated engine starting battery to avoid accidentally draining the entire 12v system.

Because inverters and battery chargers share certain electrical components, many models are available as combination inverter/charger units. Most automatically switch almost seamlessly to battery charger mode when plugged into shore power or if the generator is turned on, changing back almost seamlessly into an inverter mode when the AC power input is turned off. Most models have multi-stage chargers that prolong the life of your batteries by monitoring them and altering the charge rate according the battery’s needs and condition. Since overcharging and poor charging are among the leading causes of death among batteries, this is an important feature. Also, some inverter chargers can be set to optimally charge specific banks. You can program them as to ambient temperature, battery temperature, bank size, battery type and other factors. This is a very desirable feature.

Larger inverter/chargers not only have smart three stage charging but can also supply very high DC charging output if needed by the batteries. This is important because, there is power lost when inverters change DC to AC, not merely in proportion to the DC generated, but also because of efficiency issues in the process. The more AC power produced by the inverter, the greater the DC loss attributable to a low efficiency. Look for the efficiency rating when buying. If you have an inverter/charger that can supply high amperage, “intelligently” to your batteries when charging, you can turn off your generator earlier and go back to quiet power.

Before you can select the appropriate inverter, you must first analyze your power needs, including future additions. The key is to determine the maximum amount of 120 Volt AC power you and your crew will use at any one time, keeping in mind efficiency issues and the fact that the more you use the sooner you’ll discharge the battery bank if you have no charging source, such as a generator or engine alternator, running. Small inverters will operate one or two smaller appliances simultaneously. If you want to run the TV, VCR, and computer in the salon while a crew makes microwave popcorn, you’ll need a larger capacity unit.

Inverters are typically rated by maximum continuous watts. The most accurate way to figure the watts you might use is to check the data plate on each 120 Volt AC appliance you plan to have on board. Be aware that some items can vary in wattage significantly depending on the setting chosen. Also note that most motor-driven equipment such as blenders and power tools draw a power surge for a few seconds at start up. Modern inverters generally accommodate such momentary surges as long as you don’t switch everything on at the same time.

To determine the proper inverter size for your boat, make a list or spreadsheet of all the 120vAC equipment you will run, adding its wattage in a second column. If the appliances data plate states the power in amps, convert to watts using this formula:

Add the wattage of all the appliances that you want to operate simultaneously, making sure you include any items, such as a refrigerator, that run continuously. The total wattage run at one time is the minimum size inverter you should consider. However you should always purchase at least one size larger. You will probably discover more uses for your inverter after you’ve installed it — and if you turn too many loads on at the same time, the inverter will overheat and shut down. Also adding up power requirements on labels of devices does not include efficiency loss and loss of voltage (resulting in increased amp draw) through wire runs and possible resistance in connections and elsewhere.

We mentioned startup power surges. Transformer inverters (these have large coils of wire inside) may handle these surges better than inverters using other more sophisticated technology. But these are larger and may be considerably heavier, although the cost is usually smaller.

Choosing Batteries To Power the Inverters

Inverters depend on adequate type, size and number of ship’s batteries for proper operation. To estimate the size and number of batteries you’ll need, expand your list of appliance wattages by adding a third column for the amount of time you’ll want to run each piece of gear in a 24-hour day. Since battery capacity is measured in amp hours, you’ll need to build a forth column for adding up the amp hours required. Convert the watts to amp hours using this formula:

When your chart is complete, (see example below) you will see immediately which appliances are going to pull the most juice out of the batteries. Note that it isn’t always the high draw items that cause problems — the blender may draw six times the watts of the TV, but since its use is short, the TV has a much larger total. Now is a good time to reconsider high draw items, especially those with heating elements such as toasters, hair dryers, and waffle irons. You probably will not want to run these on an inverter, rather wait until the generator is on or until you’re charging your batteries with an engine driven alternator.

In our example, a total of 397 amp hours is required to meet the power needs from the inverter in 24 hours. But the inverter’s draw of 12 Volt DC from the battery to supply that AC demand will be more because of the efficiency loss, the energy required by the inverter to do its job and other factors. (Your inverter specifications should give you relevant information as to this.) And you shouldn’t draw down the batteries too low, and battery efficiency may be quite low depending on their age, the temperature and how well they’ve been charged and maintained. Therefore more battery power will be needed than the simple total. At a minimum you would want to add 50% more battery capacity for a total of 596 amp hours. Be aware that batteries age and die faster if “cycled,” (discharged and recharged) frequently and even faster if cycled deeply (with deep discharges). Many battery manufacturers recommend that you double the needed capacity to avoid premature destruction of batteries — in our example this would result in a bank with 794 amp hours. There are several different types of batteries that perform well but differently. These include wetted lead acid (old fashioned but these were what powered submerged submarines before nuclear power, and still do on some subs), gel cell, AGM and others. Development of improved batteries is ongoing actively and before you buy you should investigate to learn about the latest products out there and what’s most likely to suit your needs.

When constructing your appliance list, don’t forget that the demands from the inverter aren’t the only items your batteries have to handle. They still have to keep pace with all the 12 Volt DC users such as lights, electric head, water pumps, electronics and other systems. Also, the appliance list won’t include power lost due to lack of efficiency and wire runs.

Just as you monitor your car’s fuel gauge, you must be aware of the status of your batteries. Most inverter manufacturers offer excellent remote panels, some with sophisticated battery monitoring systems. A few of the features available include low battery alarm, overload warnings, current in and out and the number of amp hours consumed — all on a panel mounted in a conveniently visible location.

Every amp hour drawn out of the batteries must be replaced. If your boat has a generator or you plug into shore power at the end of each day, this may be of less concern. If you anchor for more than a few days without a generator, however, methods of replacing the batteries’ expended juice must be considered. High-output alternators on the main engine, wind generators and solar panels can all be arranged to keep the system supplied with enough energy, depending on your usage. Although remember that running the main engine for long periods of time merely to power the high output alternator isn’t very good because there isn’t sufficient load on the engine.

All inverter installations require a large, dedicated 12 Volt fuse in the main power line from the battery to the inverter. Be sure to purchase the correct fuse block and fuse with the inverter — it’s always wise to carry a spare fuse if you plan a long term cruise. It is very important to follow carefully all the instructions in installation and operating the inverter. Larger inverters can consume a lot of DC power at times, and the wiring must be as specified by the manufacturer, not only to promote efficiency, but also to avoid fires and melt downs. A good unit will have a thorough set of instructions. Remember also that AC power from an inverter can cause fatal electric shock, just as it can if it’s the shore power or generator. Proper wiring and circuit breakers and all other aspects of installation and operation, according to applicable ABYC (American Boat and Yacht Council) standards is important. And post warnings in appropriate places that, although the boat isn’t “plugged in” wires and components may still be hot with AC current.

Technology, knowledge and practices change almost daily therefore it is prudent to research for the very latest up to the date information and seek qualified professional assistance when needed.