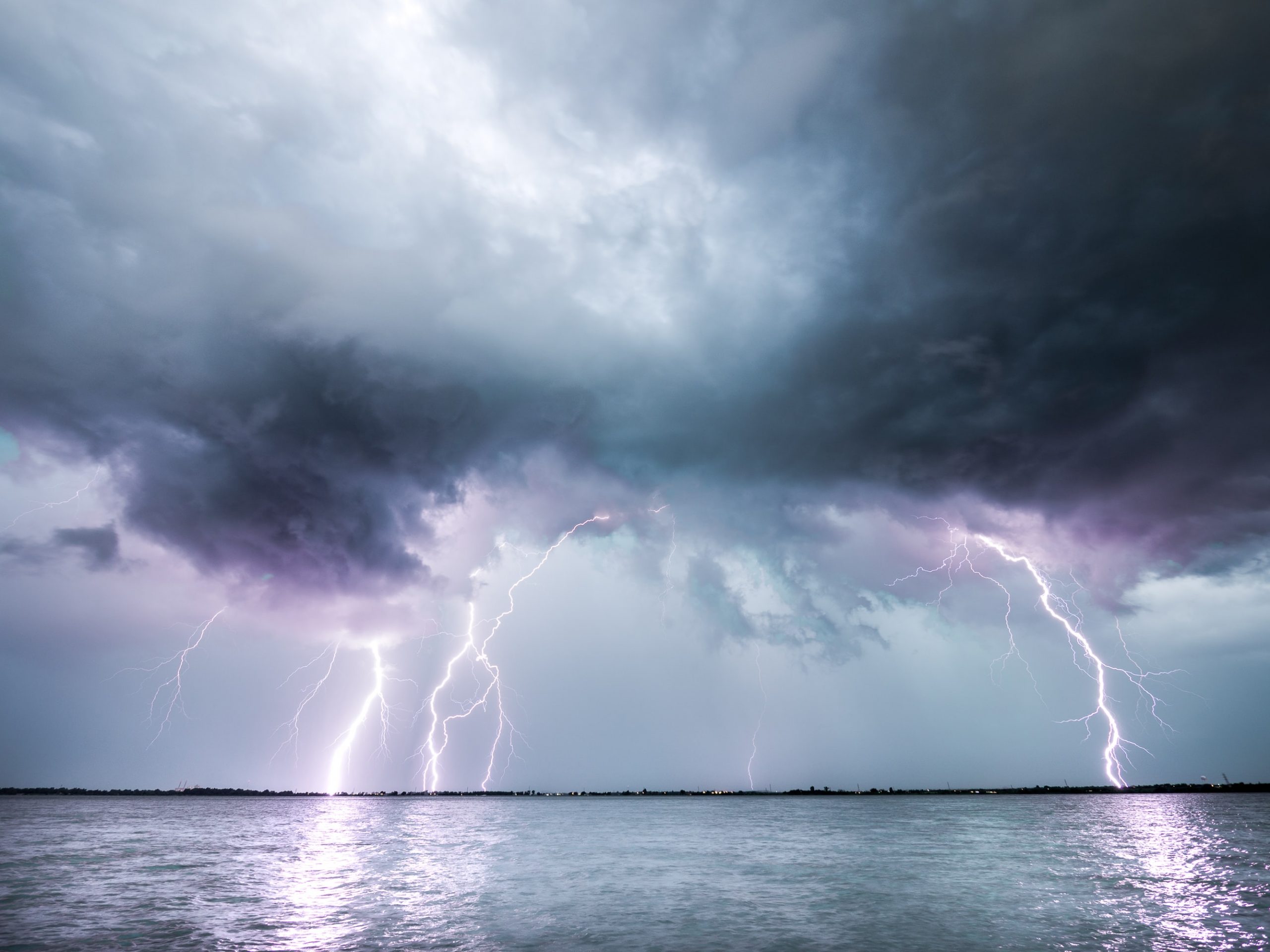 Powerful, dangerous, highly unpredictable — all are common descriptions of lightning strikes while boating. A direct lightning strike while boating can result in ringing ears and a few roasted electronics; That is considered lucky. Unlucky is experiencing through-hulls blown out, a sunk boat or worse — possibly serious injury or death.

A strategy of boating only on sunny, cloudless days may work well in places like Idaho and California, but that would mean almost never using the boat in places such as Florida, Louisiana and much of New England where storms boil up and move in quickly on hot summer days. Boaters should track VHF, Internet and television weather reports and make responsible decisions about whether to go boating depending on the likelihood of storms. Short-term forecasts are actually good at predicting bigger storms, but small, localized storms might not be reported. This is when knowing how to read the weather yourself can come in handy.

Lightning strikes while boating typically occur in the afternoon. A towering buildup of puffy, cotton-white clouds that rise to the customary flat “anvil” top is a good indication to clear the water and seek shelter — or move out of the storm’s path if possible. That’s if the storm is at least somewhat off in the distance (most storms are about 15 miles in diameter and can build to dangerous levels in fewer than 30 minutes). If lightning and thunder are present, just count the seconds between the lightning and corresponding thunder and then divide by 5 — this will provide a rough estimate of how many miles away the storm is.

A storm that builds directly overhead might be less obvious until those pretty white clouds that were providing some nice shade moments ago turn a threatening hue of gray as rain dumps on you and the wind starts to howl or, worse yet, boom with thunder and lightning that are right on top of each other. Now is the time for a mad dash to the dock and shelter if close by. Like the National Weather Service says: “When thunder roars, go indoors!” If out on open water or too far from shore and shelter, it’s time to hunker down and ride it out.

Getting caught in a storm is not always avoidable. but there are plenty that can be done do to minimize the chance of a lightning strike.
We all learn in grade school that lightning seeks the highest point. On the water that’s the top of the boat. Typically a mast, antenna, Bimini top, fishing rod or even the tallest person in an open boat. If possible, find a protected area out of the wind and drop anchor. If your boat has an enclosed cabin, direct people to go inside and stay well away from metal objects, electrical outlets and appliances (it’s a good idea to don life jackets too). Side flashes can jump from metal objects to other objects — even bodies — as they seek a path to water. Lower your antennas, towers, fishing rods and outriggers, unless they’re part of a designated lightning-protection system.

Never use the VHF radio be used during an electrical storm. (handhelds are OK). Also, be careful not to grab two metal objects.. Like a metal steering wheel and metal railing — that can be a deadly spot to be if there’s a strike. Many boaters opt to steer with a wooden spoon and keep their other hand in a pocket if forced to man the helm during a storm. Many boaters prefer to wear rubber gloves for insulation.

If shore is out of reach, then drop anchor. Remove all metal jewelry, put on life jackets and get low in the center of the boat. Definitely stay out of the water and stow the fishing rods. If all goes well, the storm will blow past or rain itself out in 20 to 30 minutes. It’s best to wait at least 30 minutes until after the last clap of thunder to resume activities.

Knowing what to do in a storm and having the best lightning-protection system installed on the boat is by no means a guarantee that lightning won’t strike. The immediate checklist for a direct hit is very short:

1. Check for unconscious or injured persons first. If they’re moving and breathing, they’ll likely be OK.

2. In the meantime, have someone check the bilges for water. It’s rare, but lightning can blow out a transducer or through-hull — or even just blow a hole in the boat. Plug the hole, get the bilge pumps running, work the bail bucket or whatever it takes to stay afloat.

If there are no injuries and no holes or major leaks below, just continue to wait it out. Once the danger has passed, check the operation of the engine and all electronics. Even a near strike can fry electronics and an engine’s electronic control unit, cutting off navigation, communication and even propulsion. Some boaters have charged handheld VHF and GPS units and a spare engine ECU in the microwave for this reason. These makeshift Faraday cages have saved equipment.

Even those lucky enough to come away unscathed with no damage should have a professional survey done just to be sure. Minor damage to through-hulls can result in slow leaks, and all manner of electrical wackiness can emerge — sometimes much later. It’s best to catch these issues right away and get that information to the insurance folks for coverage.