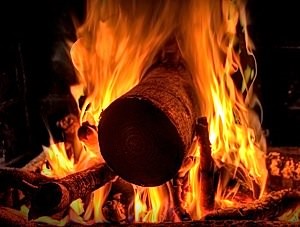 The custom of burning the Yule Log goes back to medieval times. It was originally a Nordic tradition. Yule is the name of the old Winter Solstice festivals in Scandinavia and other parts of northern Europe, such as Germany.

The Yule Log was originally an entire tree. It was carefully chosen and brought into the house with great ceremony. The largest end of the log would be placed into the fire hearth while the rest of the tree stuck out into the room! The log would be lit from the remains of the previous year’s log. It was considered important that the re-lighting process was carried out by someone with clean hands. Nowadays, of course, most people have central heating so it is very difficult to burn a tree!

In Provence (in France), it is traditional that the whole family helps to cut the Yule log down. A little bit is burnt each night. If any of the Yule log is left after Twelfth Night, it is kept safe in the house until the next Christmas to protect against lightning!

In some parts of Holland, this was also done, but the yule log had to be stored under a bed! In some eastern European countries, the log was cut down on Christmas Eve morning and lit that evening.

In the UK, the Yule log is called ‘The Mock’. The log is dried out and then the bark is taken off it before it comes into the house to be burnt. Barrel makers (or Coopers as barrel makers were called) gave their customers old logs that they could not use for making barrels for Yule logs.